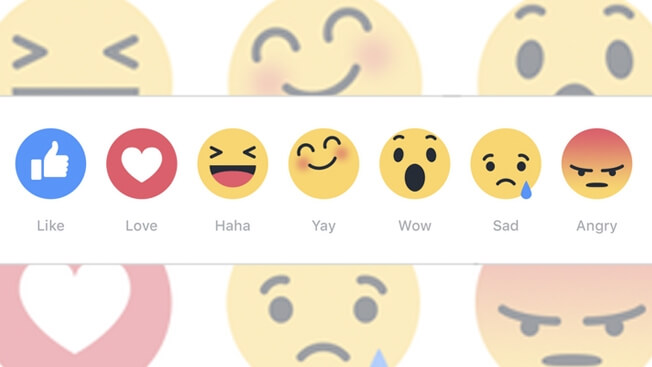 The “LIKE” button has finally evolved. Facebook unveiled five animated emojis you can choose from instead of just the standard “LIKE” including Love, HaHa, Wow, Sad & Angry

By popular demand, Facebook is going beyond the ubiquitous thumbs-up button with a new shorthand to express your thoughts and feelings.

Acknowledging that “LIKE” isn’t exactly the right sentiment for every occasion. The new Emoji’s rolled out to Facebook’s nearly 1.6 billion users around the globe Wednesday February 24th.

After more than a year of research, focus groups, surveys & more done by Facebook…You now have more authentic ways to quickly and easily respond to posts, whether they are sad, serious, funny or happy.

Facebook will continue to gather feedback on the feature and could tweak it down the line. While the company doesn’t have plans right now to expand “Reactions” to other Facebook-owned apps like Instagram, the feature could carry over to other apps in the future.

-Hovering over the like button on your computer allows you to use Facebook reactions on Mac or PC. If you don’t see the option, you will need to wait a little while, but it will be available to all Facebook users shortly.

-Long pressing on the Like button on iPhone or Android will open the Facebook Reactions options on Android and iPhone.

Pick the one you want & boom..POSTED!

Warning: array_merge(): Expected parameter 1 to be an array, int given in /home/m108tbujgq5e/public_html/smalltalkmedia.com/wp-content/plugins/mailchimp-for-wp/includes/forms/class-form.php on line 239

Warning: array_merge(): Expected parameter 2 to be an array, null given in /home/m108tbujgq5e/public_html/smalltalkmedia.com/wp-content/plugins/mailchimp-for-wp/includes/forms/class-google-recaptcha.php on line 31